Sunday Mourning is the band I do with Sanna Charles (on drums). We got together sometime in 2009 with the idea of making downtempo, moody acoustic music with a penchant for heavyness. Since then, highlights have included doing a debut set in NYC, playing in churches, joining a super-group of sorts, recording a cassette tape in my bedroom while drinking Moonshine and staying in for NYE to record our debut album which will be out on Aurora Borealis (sample below). I also (accidently) broke Sanna's wrist at the end of a festival we played. Here's some pictures and video of us supporting Bong in a church and also featuring Dave Briggs (The Hills have Riffs) on guitar.
Sunday Mourning
Aurora Borealis 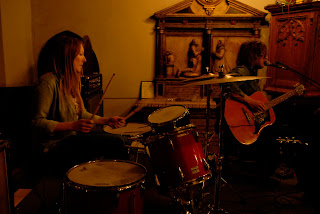 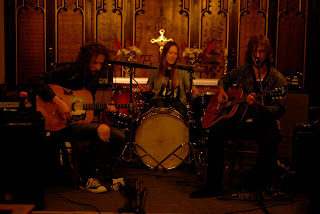